A GEOCHEMICAL ANALYSIS OF THE WATER IN SALINE VALLEY, CALIFORNIA

For many years I had the privilege of living at the Lower Warm Springs while serving as camphost. During my tenure, two of the most commonly asked questions were: "Is the water drinkable?" and "Where does the water come from?" Several years ago I ran away from "home" to return to school and pursue a degree in geology, and I now feel that I have the tools to answer these questions.

During Easter break in 1996 I visited the valley and took water samples from the Lower Warm Springs, Palm Springs, and the Gervais Ranch (or the Screw Bean Ranch, where Glen and Sherri Cosgrove reside). I have subsequently returned and collected additional samples from Hunter Canyon, Beveridge Canyon, and Willow Creek. The samples have been analyzed in the lab, and the results of these analyses allow me to definitively describe the water quality, and to suggest the source of the water at the springs based upon geochemical data.

The analyses show that the water from the Lower Springs and Palm Springs is for all practical purposes identical. For comparison I include the results of the analysis of the water taken from the Gervais Ranch. It may be safe to assume that the water from this location is similar to water found at Wendell Moyer's properties to the north.

First I would like to give you a little introduction to geochemistry so that you might better understand how some of the interpretations that I will suggest can be made. Water in its pure form is composed of two atoms of hydrogen and one atom of oxygen, represented by the familiar formula: H2O. In its pure state, water is neutral, which is to say it has a pH of 7. Water very rarely stays neutral, however. As it falls through the air as rain, it absorbs some carbon dioxide (CO2), and in the process becomes carbonic acid (H2CO3)- a very weak acid (pH of about 5.7). There are several other ways water can become acidic: plant roots release CO2, which is absorbed by water, or water may become slightly acidic by proximity to some geothermal sources. Regardless of the cause, water rarely stays neutral with respect to pH, which has important effects upon the way water interacts with the rock. As groundwater moves through rock or soil, it has a tendency to dissolve the minerals that constitute the rock into ions, much as the mineral halite, or salt (NaCl), dissolves in water to become Na+ and Cl-. These ions are often referred to as "dissolved solids," and the types and relative amounts of dissolved solids give water unique characteristics. These characteristics determine the potability (drinkability) of a water. They may also be used to infer the history of the water’s interaction with the rock that it has moved through, and may be used to "type" waters into families for purposes of further identification.

Next, let’s look at the water at the Warm Springs as to potability, with respect to guidelines established by the Environmental Protection Agency (EPA). The EPA has established the recommended limit for total dissolved solids (TDS) in drinking water at 500 milligrams/liter (mg/l). At the Lower Warm Springs, TDS is found to be 895 mg/l. Three other dissolved ionic species exceed EPA recommended limits or maximum permissible concentrations. These are: boron, 1.57 mg/l (EPA recommended limit: 1.0 mg/l), sulfate, 253 mg/l (EPA recommended limit: 250 mg/l), and fluoride: 5.15 mg/l (EPA maximum permissible concentration:1.4 to 2.4 mg/l). All other dissolved species found in the water are within EPA limits. This is not to say the water found at the springs is unfit to drink: many of us have used it for years without consequence. I would merely suggest it is not the highest-quality water you might choose for drinking purposes. For soaking purposes it is (in my opinion), the finest, cleanest, sweetest water you could find!

Based upon geochemical "fingerprinting," the source of the water at the Warm Springs may be inferred to be the Inyo Mountains. Fingerprinting is the graphical representation of the relative amounts of major dissolved ionic species found in different water samples. The accompanying graph illustrates the similarities in relative concentrations of samples taken from the valley. Simply stated, all the waters represented on the graph appear to be of the same "family." That is to say, the relative concentrations of each species of dissolved ions in all of the samples are similar, proportionally to the other species of dissolved ions found in the samples. (Or more simply stated: the form of the line made by "connecting the dots" shows similarity between all samples.) Of interest is the fact that waters issuing from the Inyo Mountains show the least concentration of dissolved ions, and each species increases in concentration as one moves east, from the Inyo’s canyons to the Gervais Ranch to the Warm Springs. Of further interest is the relative concentration of bicarbonate (HCO3). Bicarbonate is a good indicator of the relative amount of time water has spent in the ground. Higher concentrations indicate longer "residence" times, as water moves through rock and soil. Given the similarity of "family types," and the increasing concentration of all dissolved ionic species, including bicarbonate, as one looks at the water chemistry from west to east, it seems likely that the water we enjoy at the Warm Springs has its origin in the Inyo Mountains. (Isotopic analysis also indicates that waters at the Warm Springs originated as rainwater, but discussion of that aspect goes beyond the scope of this article.)

If anyone would like to discuss these analyses further, or has questions regarding any points raised in this article, please feel free to contact me through e-mail at: 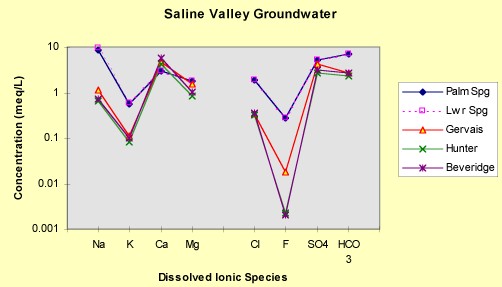