Being something of an eclectic personality drawn to extremes, and recently retired from teaching, I have become a born-again snowbird and find myself dividing my time between the Mojave Desert and the rain forests of Alaska.

During the winter months I live in Ridgecrest, California, which has become known as the earthquake capital of the United States. It sounds worse than it is! Most of our quakes are of a very low magnitude and are generally unnoticeable. This is one case in which having more faults works to one's advantage! As if that doesn't make you want to move here, Ridgecrest is a gateway community to Death Valley, one of the national 'hot spots.' We have a saying: "Once you learn to love hell, you will be in heaven!" (Don't miss the other links to "hot" Death Valley websites below). Actually, there are two really hot months, two relatively cold months, leaving eight really fine months, but I limit the stay to about five months. 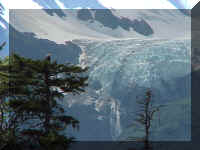 Somewhere along the way I got tired of the hot months, so I began to Alaska over the summer. A few  years back, I bought a few acres on the water in the town of Haines. The property enjoys a wondrous view, including a hanging glacier across the fjord, and salmon run by my favorite rock. (I took this picture from a kayak off the point of the property.) Even when I don't catch anything (often enough!) I enjoy just sitting and watching the world. In addition to salmon, we have lots of eagle and moose in the neighborhood. I suspect one or two bear may wander around as well, though I haven't seen any sign of them yet. We started clearing for a building site in 2001, put in a road, and drilled a well. In 2002 we built a practice house, consisting of a two car garage with a small apartment above (affectionately named the Garagemahal), where we could stay while we contemplated and completed the main house. Seven years later, I'm still building. I've come to realize I'm a project kind of guy who is happiest when there is something to work on, and this project seems to have well satisfied that craving. There are four seasons in Alaska, Winter, Still Winter, Almost Winter, and Construction.

I very much enjoyed teaching as a profession, however somewhere along the way I realized that to be a teacher one needed to have people interested in learning, and middle school was a challenge to test a person's ability to stimulate and lead young minds. Teaching is in fact a bipolar profession, where a middle school teacher is someone who is trying to earn their place in heaven while their students are wishing they would go to hell. I finally decided that teaching was getting in the way of my Haines time, and retired in 2008. People say I seem far more relaxed now. I still like to substitute teach at my old school and in Haines, and give courses in digital imagery and photography in Haines.

Anything and everything that's anywhere near current  - This is where to look for current events and recent happs in my life and travels. This site is often updated.

Images of Death Valley from a variety of radar. Courtesy of NASA & JPL.

A proposal for the reevaluation of the groundwater flow model of Indian Wells Valley, California: this is my proposal for my Master's thesis, accepted July 1998. Find out how dry groundwater can be!

Geochemistry of the water in Saline Valley, California: an article by yours truly

Latest earthquake information as provided by the U.S.G.S. including California and Nevada as well as other region of the United States

Homepage of the Independence Dike Swarm: Reminiscent of Apophysis Now, an excellent account of the GSA 1998 spring field trip with numerous photos of your favorite oblique intrusives.